Will the NLRB be Able to Protect Workers’ Rights? 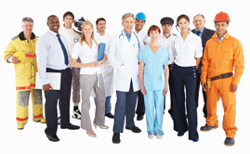 The workplace rights of millions of working people will be at risk if the U.S. Senate does not approve President Obama’s five bipartisan nominees to the National Labor Relations Board (NLRB). This morning, AFL-CIO President Richard Trumka joined Sen. Jeff Merkley (D-Ore.) for a discussion of the NLRB’s role as an advocate for all U.S. workers, how the board can function in the face of Republican attempts to prevent it from doing its job and potential Senate rule changes to end the obstructionism that’s blocking NLRB nominees. The discussion was held at the Center for American Progress in Washington, D.C.
Stay tuned for a video of the discussion!

Read more about the politicians who want to diminish workers rights: CLICK HERE ! !