Well known Arbitrator Douglas J. Bantle has been appointed by the Public Employment Relations Board to be the Fact-finder in the negotiation between CSEA Unit 7400 and Monroe County. Currently the chief negotiators are working with Arbitrator Bantle to establish the dates for the actual fact-finding. Fact-finding is an intense process that will take a great deal of work from all involved. The Chief Union Negotiator Robert L. Leonard stated "I still hold out hope that the County and the Union can reach a fair agreement", Leonard added "regardless of fact-finding the County and the Union can meet at any time in an attempt to reach a fair agreement at any time". Keep your eye open for future "BLASTs" for the most current negotiation updates.
“We are really working hard to have a perfect argument for the Fact-finding”, said CSEA Unit 7400 President Cris Zuffuto. She added, “We’re looking to have all bases covered and appreciate the help the membership has provided”. 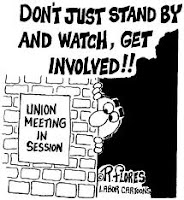 While fact-finding work continues, Unit 7400 leaders continue to urge members not only to attend the legislative meetings, but we want members to speak with regard to the services they provide and take the time prior to the start of the session to make yourself known and introduce yourself to your legislator, it’s important they know that you are not happy about the lack of progress on the contract and that you are willing to make your family, friends and neighbors aware of the problems in your area.
We also are taking all avenues to make these issues visible to the community. If you have a facebook account, please remember to join the "CSEA Unit 7400 cause" page to show support of your negotiation team. Once you sign into your facebook account, simply enter "CSEA Unit 7400 cause" in the search box at the top of the facebook page and join "the cause".
Important date to remember:
Tuesday, June 14th, 5:45 - Monroe County Legislative Meeting, Monroe County Office Building
Thursday, June 16th, 5:30 – Mobilization Taskforce Meeting, Rochester Satellite Office
PLEASE CALL 328-5250 TO CONFIRM YOUR ATTENDANCE
The CSEA Unit 7400 Leadership thanks all members for their continued involvement and will continue to keep all members up to date on the contract situation. Reminder: Get up to date info at the Unit 7400 Blog at http://unit7400.blogspot.com

On Thursday night, CSEA Unit 7400 members attended the bi-monthly General Membership meeting to get information on the current situation with contract negotiations. However, they not only got an update, they received info from a presentation describing the current issues facing the labor movement and the affect nationwide and statewide issues can and are having can be seen here in Monroe County as well.
CSEA Region 6 Director, Roger Sherrie, gave a presentation about the current situation facing public unions across the country. The focus is how Corporate America took advantage of discouraged voters and by pouring millions of dollars into campaigns, elected anti-union governors and state Legislators in more than half of the states across the nation. Their agenda is not only to weaken public union worker influence, but to downgrade the working class and increase corporate incentives from government resources and strengthen the status-quo. The key to end public unions is to end the ability for collective bargaining and they are doing this in Wisconsin, Ohio, Michigan, Florida, Nevada, New Hampshire and Maine. In New York, the attack is on the Triborough Amendment, which is the law that allows public employees to retain their benefits after a contract expires and continue under the rules of that contract until a new one is negotiated and ratified. Legislation that would end Triborough has been introduced and we need to do all we can to make sure this does not happen. Members need to confront every attack on public employees and have “courageous conversations with their relatives friends and neighbors to educate them on the truth behind these corporate attacks.
CSEA LRS Robert Leonard gave an update of contract negotiations. We are in the Fact-finding process and working on a presentation of our proposals and statistical support to illustrate to the state appointed Fact-finder that the County has always had the economic ability to comply with our conservative proposal, but just lack the political will to do the right thing and creating a fair contract that benefits the workforce and does not burden the public.

CSEA Unit 7400 President Cris Zaffuto said, “I’ve told the legislators and the administration that it is time to stop playing politics, but it is also time for the entire membership to reach out to their legislators and the county executive to make their point known that they are not at all happy with the status quo, that a fair contract is needed now…no more games about it, we have to take action, we can’t afford to remain silent anymore”.
All members are urged to attend the June 14th legislative meeting. Members should introduce themselves to their legislator prior to the beginning of the meeting. Members who wish to speak with regard to the work they do and how it affects the community should call before the meeting to sign-up at 585-753-1950. The County needs to know the “politics” need to end. The time for a fair contract is now. 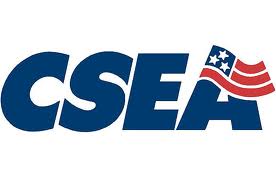 Print of a copy of the "BLAST" for your co-workers: CLICK HERE

CSEA Unit 7400 to Legislators: “A Fair Contract is Well Overdue"

On Tuesday, May 10th, CSEA Unit 7400 member-activists filed into the Legislative chambers once again to show their persistence, frustration and disenchantment with the lack of any legislative input into creating positive negotiations between the appointed administration and the workforce. Many “first-time” members showed up this night to make the point to the legislators that they are tired of the rhetoric and want to get to the real business of negotiating a fair contract. Members of CSEA continue to call on the legislators to become involved with the negotiations process, force the administration to bargain in good faith and create a positive contract that benefits all involved parties.

“I was glad to hear the County Executive give praise to all the department heads yesterday, however, it is well overdue that the workforce which runs this County get recognition in the form of a fair contract”, declared CSEA Unit 7400 President Cris Zaffuto. “It is time to stop playing politics and give the workforce the respect they deserve, as many of you [legislators] know the work we do makes you look good too”.

Other members went to speak at the podium as well. Todd Wersinger, CSEA Probation Section President spoke to the legislature on the fact that the same amount of probation officers work the specialized duty of sex offender cases as did twenty years ago even though the case amounts have tripled since and new technology and more in depth processes have been implemented by probation. Wersinger said, “We work to keep this community safe for your mothers, sisters, daughters and sons and as disheartening as this work sometimes is, we’ll continue because everyone deserves to live in a safe community”. 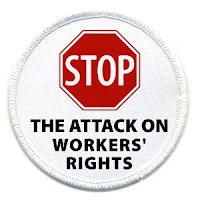 Camille Julian, Nutrition Assistant, spoke to the Legislators about the services she and her fellow members provide as well. She told the Legislature that CSEA has been good for and the workforce doesn’t deserve to be shunned. “CSEA is not a four lettered word” stated Julian. “My co-workers and I do a great job for this County, I’ve received a lot of positive feedback from the community and I am proud of the work I do, proud to be a County worker and proud to be part of CSEA”.
Lack of any positive agreement has caused the CSEA team to declare to go to the Factfinding and work towards that process is ongoing. However, CSEA Unit 7400 continues its pledge to meet with the County at any time if the County wants to fairly negotiate.
Important date to remember:
Tuesday, June 14th, 5:45 - Meeting, County Office Building
Posted by Jim D'Amico at 2:10 PM No comments:


Rochester, N.Y.--  On Saturday, April 30, three dozen men and women from the Rochester area gathered at Monroe Community College for a workshop discussion titled, "Awesome Women:  Past, Present and Future."  The event was sponsored by the CSEA Monroe County Local 828 Women's Committee.

Quotes and words worth remembering included but not limited to:

Linda Donahue: Quoting labor icon and feminist Rose Schneiderman right after witnessing women throwing themselves out of the ninth floor windows of the burning NYC Asch Building during the tragic Triangle Shirtwaist Factory fire in 1911 that killed 146 garment workers, "Life is so cheap and property is so sacred."

Dr. Anne Kress:  "Become part of something that is bigger than yourself.  In your personal journey, know when your opportunities exist and be prepared to ask yourself what do you want to give up? And, behind every great woman is herself."

Camille Julian:  "I always told my children that the road you take in life will always be a journey forward."

Linda Donahue: When referring to the enactment of early 20th century labor laws, "Laws are often used against us as well as for us."

Dr. Caroline R. Dignan:  "I never considered the money when I decided to follow my dream to study forensic pathology."

Erin Julian:  "Everyone can make a difference in your community-- all you have to do is volunteer."