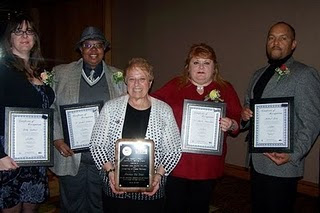 SEE THE FULL STORY ON THE LOCAL 828 SITE: CLICK HERE

A New Message From Your President 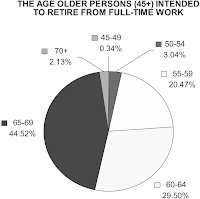 As promised, your CSEA negotiation team is back at work trying to come up with solutions that will be satisfactory to everyone. We have begun to brainstorm and discuss the issues that are important to our members. As of now we do not have a date to go back to the table with Monroe County, but believe that will be forthcoming. Please check on the website and blog spot for updates.

-- photo by Ove Overmyer
CSEA members from all over Region Six help raise thousands of dollars for the NYS Special Olympics Sunday February 21, 2010. For more information on this event see the CSEA Local 828 Voice Reporter (Click Here).
Posted by Jim D'Amico at 4:54 PM No comments:

YOUR NEGOTIATION TEAM WILL BE HEADING BACK TO THE BARGAINING TABLE!! 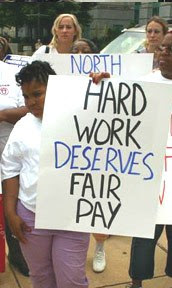 The second tentative agreement has been voted down, so as promised your negotiating team is back to work. We have had a brain storming session to discuss the issues that have come to our attention from the meetings that we had around the county. We have been in touch with the PERB Mediator as he will be back in another attempt to facilitate an agreement. As we said in our meetings we will move forward to try and get a contract that YOU as union members can accept.

On that note I would like to just let everyone know that your negotiating team takes their job seriously when it comes to obtaining a collective bargaining agreement. Always keep in mind that each member of the team is also a county employee and what affects the membership, affects the team.

We do not know how long it will take to get another agreement, but we will be keeping you up dated as we always have.

Thank you in advance for your support.

LOCAL 828 FIRES BACK AT PATERSON

Rochester, N.Y.-- Ove Overmyer, Local 828 VP and Unit President of the City of Rochester Library Workers 7420, fired off a letter to Rochester's City Newspaper describing what he calls unfair and untrue claims by Governor Paterson directed toward CSEA. The article appeared in the February 10th, 2010 edition of the weekly newspaper.


Here is the article:

The Paterson administration and my union, the Civil Service Employees Association, have been publicly trading barbs at one another. We are at different ends of the spectrum over how we can improve the quality of life for all New Yorkers. What particularly disturbs me is the lack of civility of the debate.

In an "Answering to Upstate" meeting in Rochester on January 26, Paterson said state employees' unions have refused to cooperate with his efforts to reduce the state's expenses. This is not true. He also stated, "There are those who are so self-absorbed ... that they thumb their nose at the public's face."

To set the record straight, last summer CSEA membership agreed to the creation of a Tier V system for new hires, long-term employees took an early buy-out on retirement, and we offered several solutions to help reduce the deficit. In turn, the governor revisited the idea of laying off more than 8,900 workers after he had said he wouldn't just four months earlier.

The governor's recent anti-union comments also gave license to others in our community to unleash a barrage of insults and nasty rhetoric about our character and even our relevancy.

This is who we are. We are your tax-paying neighbors who deliver the public services you rely on every day. We are not a special interest. We are your investment. We plow the roads so you can get to work on time. We take care of your aging parents, teach your children, get criminals off the street, and assist you when you need help finding that best seller at the public library.

The majority of public employees who are union members do not have inflated salaries or pensions. We live paycheck to paycheck like most people and are just trying to provide for our families. Union officers are democratically elected workers who represent the best interests of their members, their employer, and the greater community. For starters, my fellow union workers donate countless hours to the membership drive at WXXI and to the Special Olympics.

It deeply saddens me that our community sees public employee unions as the cause of Albany's budget problems. Laying off workers who are already overburdened will not improve the quality of life here in the Empire State. We don't need smaller government. We need smarter government.