employees once again flood the Monroe County Legislature chambers at the 1/11/11 Legislature meeting. CSEA members are demanding a fair contract. For more information read the latest BLAST by Clicking Here (feel free to print the BLAST and distribute to your co-workers). 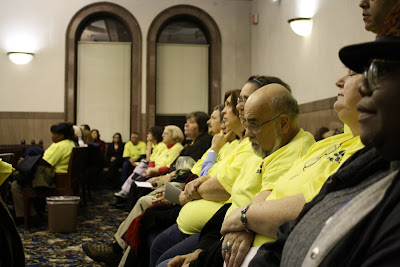 Comments made by Cris Zaffuto to the Monroe County Legislature on 1/11/11:
Good Evening,
I bring Happy New Year wishes to you from all the Hard working Men and Women of Monroe County.
I again come before you to share with you the work that goes on, on a daily bases by the CSEA members that work in this county.
Monroe County has 3 DMV offices. These are the employees who make sure that everyone in the county has a legal driver’s license and insurance on their cars.
But of course you all know that bit of information. But…….
What you don’t know is what they have to deal with everyday. As you are aware many times there are customers who are not always happy with what the DMV Rep tells them. This information sometimes leads to the employees being sworn at, yelled at and even spit on.
You may remember there was a woman who went over the table after the rep over at the mobile site across the street in city place. That’s just 1 example..Many times employees get grabbed at thru the window at the offices.
These employees handle as many transactions as a bank teller without any bullet proof glass, panic buttons or any barriers between them and the customers.
They work in conditions that are far from ergonomically correct, which may hinder their health in the future and raises the cost of Workers Comp Insurance.
These folks are dedicated employees of Monroe County. Even working in conditions that may be harmful to themselves they show up every day ready and willing to serve YOUR Community.
Which why I have to close with this:
“Monroe County Works Because We Do.”
Cris Zaffuto, President
CSEA Unit 7400
Posted by Jim D'Amico at 11:35 AM No comments:

Please bring your co-workers and family to the next Monroe County Legislature Meeting to show support for hard working Monroe County Employees:


Here is an article you may find interesting:

In 1968, 1,300 sanitation workers in Memphis went on strike. The Rev. Martin Luther King, Jr. came to support them. That was where he lost his life. Eventually Memphis heard the grievances of its sanitation workers. And in subsequent years millions of public employees across the nation have benefited from the job protections they’ve earned. (TO READ THE WHOLE OPINION ARTICLE - CLICK HERE)
Posted by Jim D'Amico at 12:13 PM No comments: 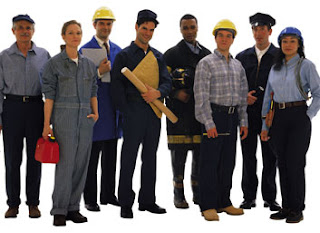 Yesterday's New York Times reports that in a number of states around the country, Republican lawmakers are taking advantage of the budget crises they face to attack unions.
Proposals include limiting collective bargaining, ending prevailing wage on construction projects, eliminating the right to strike, and even banning the union shop. Some Republican House leaders are even pushing to take the word "labor" out of the "Education and Labor Committee" and change the title to "Education and Workforce Committee." Here we are in the midst of the greatest economic crisis since the Depression, and politicians are attacking the only voice for working people in this country.
The idea that unions are somehow responsible for destroying our economy is absurd. The Labor Movement has been the most outspoken critic against all of the things that actually did cause this crisis: bad free trade agreements that harmed all workers, unfair lending practices that resulting in millions of families losing their homes, unrestrained corporate greed that rewarded CEOs for mass layoffs and the offshoring of jobs.
The Labor Movement has been the leading force to extend unemployment benefits to the millions of laid off workers and their families who depend on them. We are fighting to stop the attacks on Social Security, the most effective anti-poverty program we have in this country. Most important, the Labor Movement stands for the idea that every working person deserves to be treated fairly at work, get decent wages, and have dignity in retirement.
We want the American Dream to be realized not just by the wealthy but by those who build bridges (like my dad) and who teach the next generation of students (like my mom). We believe construction workers, delivery drivers, hotel workers, probation officers, janitors, grocery clerks, truckdrivers, nurses, cna's, homecare attendants, and cafeteria workers should make enough money to take care of their families and not have to depend on public assistance or charity.
When these workers get together to demand a decent wage for their work, they are raising wages for all workers in that industry and in that community. When they are able to get health care through the job, they are setting standards that benefit all workers, making it less likely that they will have to rely on public programs or emergency rooms. This is how the middle class in this country was built.
When workers have secure retirement, they don't have to face the shame of relying on their children in their old age. AFSCME represents 1.6 million public employees across the country -- and their members have an average pension of just $19,000 per year. No one is getting rich or living high on the hog, but maybe that's just enough that their retirees can stay in their homes, provide food and necessities, and still afford birthday presents for their grandchildren. After 30 years on the job, don't we all deserve that?
Not only do union wages and benefits raise community standards, but they directly help the economy. A city street-cleaning worker who makes a decent wage can afford to spend more at Safeway, allowing Safeway to hire more workers, who are able to take the family out to dinner once a month. A construction worker paid prevailing wage on a public works project can afford to buy a home, increasing property taxes to the community. This is the multiplier effect of good union jobs, whether public or private.
It wasn't that long ago that public employees were among the lowest paid workers in the nation. Martin Luther King Jr spent one of his last days in Memphis with striking sanitation workers to highlight the injustices they had to endure without collective bargaining rights. So what's changed? Private sector workers have suffered devastating losses. Good jobs sent overseas, industry wage standards degraded by deregulation, once secure pensions lost to corporate malfeasance. The problem we face today isn't that public employees have too much, its that private sector workers have too little.
I have a poster on my wall of that Memphis sanitation workers protest. The picket signs say "I am a man." Really, that's what the Labor Movement is about. Recognizing the dignity of every person. Rewarding hard work. Realizing the dream of economic security and a better future for your kids.
The politicians seeking to strip workers rights say it will stimulate investment. But all that means is a race to the bottom where companies jump from state to state, country to country, seeking the lowest wages. A better way to attract companies to relocate is with good schools, a skilled workforce, reliable infrastructure, and a modern transportation system. But all of that requires an investment in the people who do the work and apparently that's not something these politicians believe in.
On one of his last nights on this earth, Martin Luther King Jr faced thousands of black men in the South, striking City sanitation workers, who were putting their jobs and their lives on the line. He said to those gathered "either we go up together, or we go down together."
Today, as unemployment mounts, as foreclosures soar, as working families are forced to rely on food banks, and one in four California kids don't have enough to eat, the truth is now as it was then. Either we go up together or we go down together. Thanks to the Labor Movement, we are all in this together -- and together, we will find the way out.

Caitlin Vega is legislative advocate at the California Labor Federation.
Posted by Jim D'Amico at 6:59 AM 1 comment: