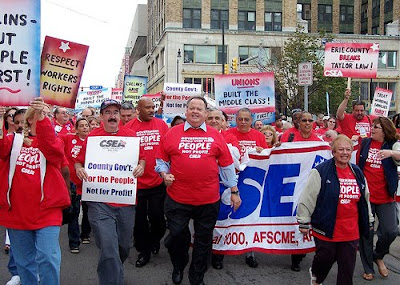 An Open Letter to the People of New York

There's been a lot of irresponsible rhetoric thrown at state workers about the state's budget problems lately and it's important to set the record straight about some basic facts.

State employees didn't cause the state's fiscal crisis and slamming them won't solve it.

New York state operations (the portion of the budget covering state executive branch agencies and facilities) accounts for about 8 percent of the total state budget. State employee paychecks are a tiny fraction of that and a very small part of the deficit problem.

Governor Paterson is wrong when he says state employees have done "nothing" to help address the state's fiscal crisis. It's insulting to state employees who are working harder than ever trying do their jobs with less help, fewer resources and scorn from the governor himself. State operations have been cut by nearly $2 billion in the past 18 months, leaving many agencies stretched to the breaking point. They are only operational because of the dedication of CSEA members and other state employees.

Let's be clear: CSEA members do the work - maintaining roads, taking care of individuals with developmental disabilities and mental illness; protecting the public health; enforcing the law; issuing drivers licenses and vehicle registrations and providing the support services that make every state agency work. The average CSEA member's state salary is about $40,000 and our average pension is under $16,000 annually. CSEA challenges the governor to work a shift in any CSEA member's shoes to understand what sacrifice is.

Since the summer 2008, CSEA has offered the governor money-saving ideas. Some ideas have been considerable: A Canadian prescription drug option that we have put forth and have helped implement in nearly 40 municipalities across the state is already saving localities tens of millions of dollars. Projections for the state savings are more significant - several hundred million dollars.

CSEA also uncovered excessive state use of temporary employees hired at premium costs through temporary employment agencies. Many of the temp workers have been working in state jobs for years and the Paterson administration has spent more than $62 million of taxpayer money on these temp workers in the past 18 months.

The governor undermines any credibility he might have on the severity of New York's budget situation when he dismisses meaningful ideas about cost savings.

Instead, he continues to turn to the media to attack CSEA's refusal to make unilateral concessions simply because he demands them. CSEA will not reopen contracts. Any business person should understand that a contract is a contract and once you open one you can never again bargain in good faith. There are always ways to find common ground, but Governor Paterson has repeatedly undermined cooperation.

The governor also seems to conveniently forget that last year, CSEA came to an agreement on pension reform that the governor claimed would save the state taxpayers more than $35 billion over time. He agreed to no layoffs of state employees for the remainder of his term and he insisted on a targeted job buyout plan. That plan, solely administered by the Paterson administration, has failed to meet expectations attracted fewer than 100 high paid management/confidential employees, including political appointees.

CSEA has been around for 100 years. We have worked with every New York governor dating back to Charles Evans Hughes. We have succeeded for a century because we care about making our state a better place to live, work and grow. Besides what we do on the job, we are also the backbone of the communities where we live, contributing in every conceivable way.

Governor Paterson has a right to be wrong, but CSEA has a right to respond when he is. We will continue to do whatever it takes to protect the interest of CSEA members and the services we provide for the people of New York.

Furloughs will not help 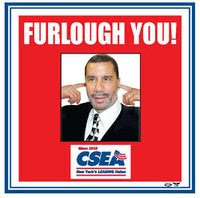 To all my CSEA Brothers and Sisters, Take time from your Lunch On Monday 5/10/2010 at 12-1:00pm and join us at the Rochester Psychiatric Center (RPC) to tell the Governor that Furloughs will not help the Budget problems and that New York State Works Because We Do!!!!! I also wanted to let everyone know that the Monroe County CSEA Negotiation Team will be meeting with the County in negotiations on June 2, 2010 to continue our struggle for a fair and equatable contract. - Cris Zaffuto
Posted by Jim D'Amico at 7:51 PM No comments: